fireflies lives in tokyo > An encyclopedia of a Japanese firefly

About a Japanese Lampyridae(firefly・fireflies)inhabiting Tokyo

Fireflies, lightning bugs, glowworms? whatever you call them, these familiar insects of the family Lampyridae, are neither flies nor bugs, but beetles (Order Coleoptera). Fireflies require moist habitats, and are found in swampy areas, fields, lawns, and at the edges of woods or streams. They exist on every continent except Antarctica, with approximately 2000 species worldwide, and about 9 species in the capital of Japan, Tokyo. Fireflies, with the exception of species that are active during the day, are bioluminescent organisms, which means that they produce their own light. Most bioluminescent insects glow continuously. Fireflies, however, are the only ones that flash. The color of light emitted, signal pattern, time and duration of nocturnal activity vary from species to species. In some of these species, all stages of the lifecycle glow, even the eggs. The term glowworm usually refers to firefly larvae and wingless females of some species, which both emit light. 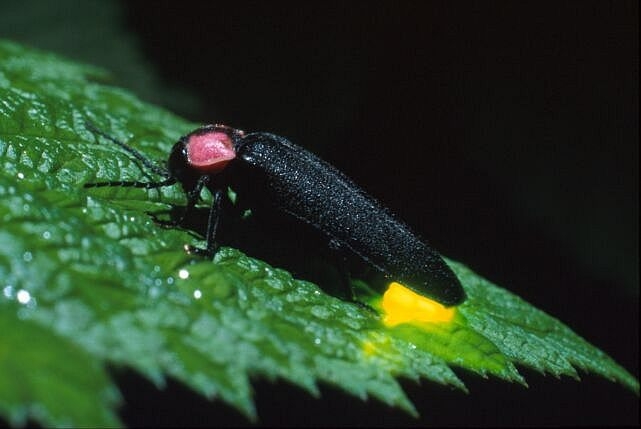 Fireflies produce light for three reasons. First, it is used primarily for finding a mate. The males flash their signal and wait for the females to respond. Females of genus Photuris, are known as "femme fatales" because they mimic the signal pattern of species of a different genus. If an unfortunate male of another species attempts to mate, the female eats him. The second reason fireflies use light is to warn others of danger. The "femme fatale" sees this as an opportunity for an easy meal, as she will be drawn by the signal, and then dine on the firefly that is in distress. Finally, the light serves as a form of form of protection from predators. Called warning coloration, the signal warns potential predators that it is distasteful. Coincidentally, it is the firefly?s light-producing chemical that has a bitter taste. Some predators have learned how to avoid this chemical, by eating a firefly headfirst and discarding the abdomen. Others, such as frogs and spiders, eat fireflies readily.

The Habits and Life-history of the Japanese aquatic fireflies (Lampyridae).

A beautiful natural environments "satoyama" is in Tokyo and the firefly lives.

Flying in the darkness near the water's edge while blinking their mysterious lights--fireflies are a powerfully poetic image of summer. The word hotaru is said to derive from a phrase meaning "to drip fire" (ho-taru), or perhaps from "fire glow" (ho-taru). The kanji literally means "lantern insect". Typical Japanese varieties are the "Genji firefly" and the smaller "Heike firefly". Fireflies emit light from larval through adult stages. The spectacle of a swarm of countless fireflies is called a "firefly contest". The peak season for fireflies is around mid-June, though Heike fireflies tend to appear later. Widespread use of pesticides destroyed the river snails (kawanina) on which firefly larvae (and some adults) feed, causing a marked decline in their numbers. Efforts to restore natural populations through artificial breeding have had some success. The great entomologist Henri Fabre found that the luminescent organ of the firefly, when detached from the insect's body, continues to emit light--a discovery which prompted research into mechanisms of bioluminescence. (Wingless larvae and females [tsuchibotaru] are known as "glowworms" in English; not a season word.)

At the water's edge, greenish-white specks of light dart about in the dark night air. Fireflies have made early summer a special time for the Japanese since ancient days. The Japanese word for firefly, hotaru, is generally used for two species, genji-botaru and heike-botaru. In their larva form, both species prey on small freshwater snails. Genji-botaru larvae live in clean flowing water, heike-botaru in rice fields and other places where water is stagnant. There are about 2,000 firefly species in the world, but fewer than 10 species are known to be aquatic at the larva stage. All of the others are terrestrial at both the larva and adult stages, making the genji and heike species very unusual. The Japanese archipelago has plenty of rivers, streams, wetlands and irrigated rice fields, and these provide excellent habitats for aquatic fireflies. So it is natural that, since ancient times, people in villages and towns have observed and enjoyed the little lights darting about in the night. Fireflies first appear in literature in the Man'yoshu, Japan's oldest collection of poetry (late 8th century). They appear in haiku, longer poems and essays right through to the Edo period (1603-1867). In the old days, there was a belief that the lights of fireflies represented the souls of the dead. In the Edo period, one pastime was catching fireflies while enjoying the cool evening air. Ukiyoe woodblock prints show things used to catch them, such as flat and folding fans, traps made of bamboo grass, and insect nets. This custom seems to have developed in the mid-1600s in the Seta and Ishiyama districts of Otsu (present-day Shiga Prefecture). When the light show was at its peak in early summer, hotaru-bune boats would take people on eating and drinking excursions to the best places to see them. 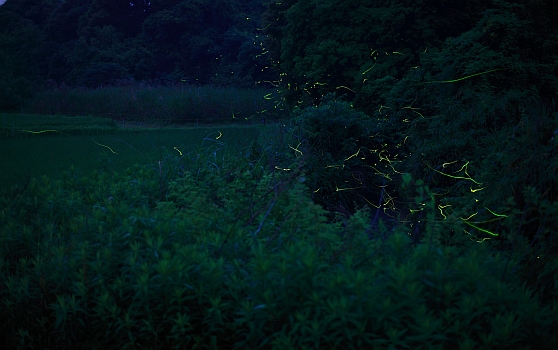 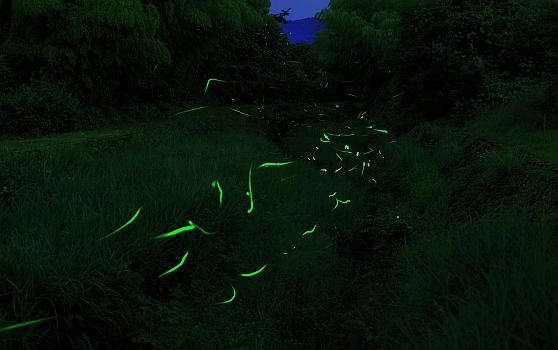 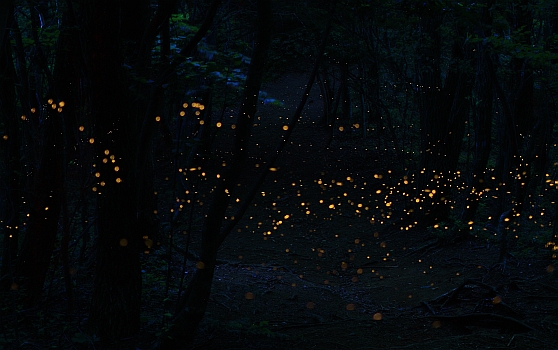 A beautiful natural environments "satoyama" is in Tokyo and the firefly lives.

The tiny, 15-mm-long bugs live only two weeks after hatching, but are blessed with phosphorescent rear ends which make clusters of them a captivating sight on summer nights. Their almost-fluorescent glow also ensures the continuation of the species: During their short life span fireflies use that glow to court before mating, subsequently hatching eggs and then dying a few days later. The bugs have long been considered a symbol of this season, and appear in countless poems extolling the simple pleasures of rural summertime. Early each June, firefly-watching events are held around Japan. These can be magical experiences: intimate quartets, for example, held in quiet forests and known to only a handful of people. Unfortunately, many events have a more adverse effect. Noisy crowds that arrive with glaring lamps and car stereos, leaving behind garbage and trampled riverbanks, frighten away every last firefly in the area.Fireflies are found in verdant, unspoiled countryside with clean rivers, far from the bright lights and refuse of human settlements. After mating, eggs are deposited into these rivers, where they hatch into larvae and grow. The larvae crawl out of the river the following April, develop into chrysalides and then sprout wings in June, before beginning the mating process anew. Females are slightly larger than males and their glow is more intense, but they are fewer in number. They tend to fly lower, near preferred hatching zones such as moss and deep grass. The most common species in Japan (of around 40 types) are genji-botaru and heike-botaru; a naming with an interesting history. It is said the souls of countless soldiers, killed in the Dannoura Battle of 1185 between the Minamoto (Genji) clan and their rivals the Taira (Heike) clan, turned into fireflies. The larger and more profuse genji-botaru fireflies were no doubt named after the winning Genji, and the smaller heike-botaru after the defeated Heike. Now heike-botaru, found in wet rice fields, are declining even further as the use of artificial pesticides and fertilizers increases.